While in Manitou Springs, I met a couple who are running a local comic book store called CK Comics and Collectibles. Had a good chat with them and was a little envious.

You see, I’ve always thought about doing that myself – opening a little comic book store.  When I first moved to Colorado, I started working on a plan to open one.  Did a ton of research into vendors and such, and even called my friend Dave who owns/runs Heroes Comics and Cards in Fresno and Clovis California.  Dave was not supportive.

Well that’s not really fair.  He wasn’t supportive of trying to open a shop anywhere near Denver due to Mile Hi Comics.  He said they had the area locked up and I’d be hard pressed to crack that market or make a living going head to head against them.  I had to admit, he probably had a point.  So I put that dream on the back burner.

ANYWAY, CK Comics and Collectibles is located in Manitou Springs, Colorado, in the very lovely downtown area (that I didn’t even realize existed!).  They don’t have a website (that I found) but they do have a Facebook page so click the image below and check them out and if you’re ever in the area, stop in and say hello. 🙂 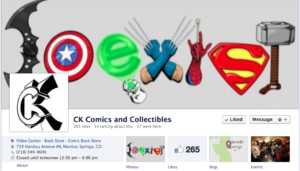