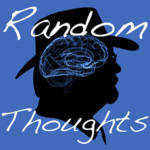 I met a person who didn’t know anything about Roswell, Project Bluebook or any of that kind of UFO stuff and I thought to myself, “How odd!”  Later, I thought, “Wait – what if I’m the odd one for knowing about that stuff and they’re normal cuz they don’t know about that stuff?”

No one at the wedding I attended (family) knew that I was up for a Hugo Award (or what it was).  (or cared?)

Look at my thumb…

Have you ever read something that flowed like an English translation of a Japanese animated television show?

“In the course of our captivity, we’d observed that the aliens have absolutely no contact with human emotions. They’ve been groomed entirely for war and their societies organized along purely military lines. It appears that they have increased their body size & strength artificially through genetic manipulation & that they also have the ability to reverse the process. While they examined us, they continued to referred to something they called protoculture.”

*insert theme to The Legend of Zelda*

I’ve been sleeping a lot since I got back from Chicago.  Hoping that is over with and I can get back to my regularly scheduled sleep cycle…