The particulars in case you forgot: I’m trolling through my comic book collection, which spans 1977-1995/6ish, because I’m feeling nostalgic and want to share.  I invite you to tag along with me cuz I hope it’ll be fun – I’m even taking pics of the covers with my iPhone (sorry about the quality there but honestly – who wants to go through and scan all these things?!)  so you can see what I see.  I’m also telling stories, which is always fun.

And since I’m grabbing boxes at random, we never know what we’re gonna get until we get it.  Got it?  Good – let’s move on then people!  Oh – and you can always click on the images for a bigger photo.

In the whole 2099 scheme of things, Marvel introduced futuristic versions of characters that we already knew.  Except for one.  Ravage.

Created by Stan Lee, Ravage (Paul-Phillip Ravage), was the CEO of a company that went up against Alchemax and lost.  Think of them as the uber-bad guys of the Marvelverse in 2099.  Sort of like Luthorcorp if you’re a DC fan.  Your typical massive conglomerate that’s pretty much taken over everything.  Like GE.  Or Starbucks.  Anyway, he was framed for murder and had to go on the run.

He ran all the way to Hellrock, where irradiated and mutated folks lived.  A hero at heart, of course he became a local celebrity and superhero.  The addition of some new powers thanks to the radiation didn’t hurt either.

First he develops glowy hands that cause lethal destruction.  Then that sort of morphs and his whole body changes.  He takes on a primal sort of beast form complete with horns and talons.  His strength increases and he gets a sort of Wolverine type healing ability that saves his butt on occasion.

I liked this series and Ravage because he was original and not a ‘futuristic clone’ – even though I liked those too.  Definite elements of scifi and fantasy here and most of it good.  The artwork, of course, was fantastic.

If I remember correctly, though, it was one of my best friends who was constantly bothering me for the latest issue.  I think it was the only time my friend David ever got into a comic to the point where he actively looked for it, even though he never bought them.  Or maybe he did – trying to remember.  He collected a bare few comics and this could’ve been one.

Ravage 2099 ran for 33 regular issues.  I don’t recall if there were any annuals…  Here’s a shot of Ravage in his beastly form: 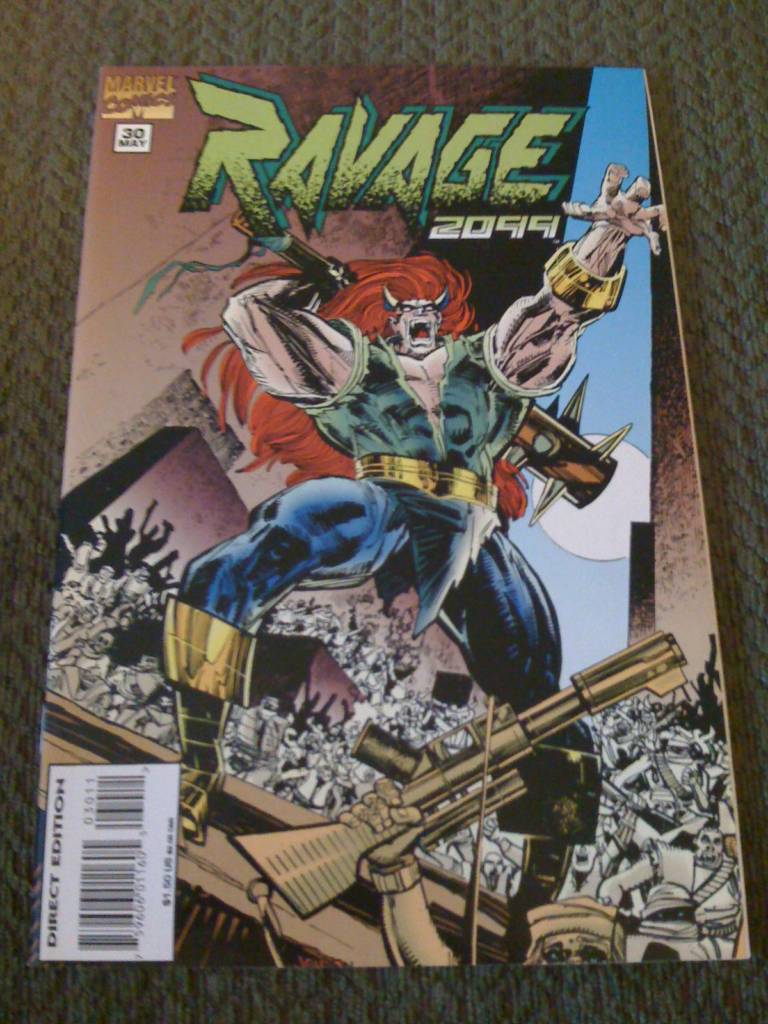