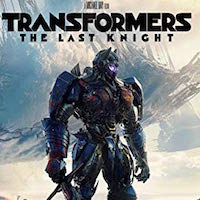 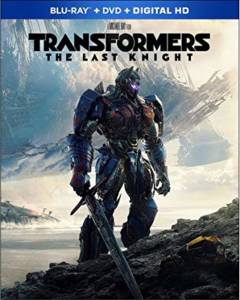 Unofficial Description: 21 mins. That’s as far as I got.

At this point, I accept it – I am not the audience for these movies. Obviously there are people out there who enjoy the Transformers movies quite a lot – they make tons of money. And that’s ok.

Would I enjoy something different from the Transformers? Possibly. But I don’t think we’ll get that any time soon. Maybe with a reboot in a decade or so.

What’s this one about? I’m not entirely sure. It was all over the place in those 21 mins, from the Dark Ages to space to ‘present day’. Transformers are illegal – again. The governments of the earth are hunting them – again. It’s simply the same stuff over and over, same plots and story with different settings. So I gave up.

Transformers: The Last Knight is currently available as part of a Prime membership, which is how I watched a bit of it.

Official Description: Autobots and Decepticons are at war, with humans on the sidelines. Optimus Prime is gone. The key to saving our future lies buried in the secrets of the past, in the hidden history of Transformers on Earth.