Friday Flick: Valerian and the City of a Thousand Planets 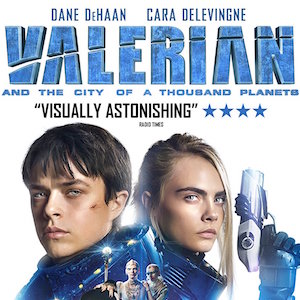 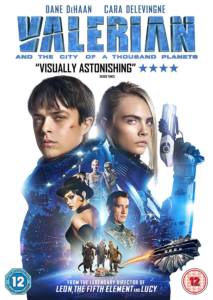 Unofficial Description: I was ridiculously excited when this movie was announced. I bought several collections of Valerian comics and burned through them in preparation. Also, I’m a fan of Luc Besson’s films, which are always visually stunning and very different from the usual stuff we get out of Hollywood.

This movie hits a couple of those beats – being visually stunning and very different – however, I didn’t care for the plot nor the actors. The characters of Valérian and Laureline – played here by Dane DeHaan and Cara Delevingne – had no chemistry on screen whatsoever. They are both very young, which felt like a very deliberate casting choice and I get it, Hollywood does that. But I think they were too young for these roles. They’re supposed to be the best agents, but are they out of high school yet?

Again, it looked amazing. I loved the different alien races and the world of Alpha with all of its different environments. But when you add a fairly predictable plot to actors who didn’t seem to fit the roles or work well together, the movie didn’t do much for me.

Valerian and the City of a Thousand Planets

Official Description: Based on the groundbreaking comic book series which inspired a generation of artist, writers, and filmmarker, VALERIAN AND THE CITY OF A THOUSAND PLANETS is the visually spectacular new adventure film from Luc Besson.

In the 28th century, Valerian (DeHaan) and Laureline (Delevingne) are a team of special operatives charged with maintaining order throughout the human territories. Under assignment from the Minister of Defense, the two embark on a mission to the astonishing city of Alpha an ever-expanding metropolis where species from all over the universe have converged over centuries to share knowledge, intelligence, and cultures with each other. There is a mystery at the center of Alpha, a dark force which threatens the peaceful existence of the City of a Thousand Planets, and Valerian and Laureline must race to identify the marauding menace and safeguard not just Alpha, but the future of the universe.