Well, the last couple of weeks have sucked, writing-wise.  Sigh.

When last we spoke, I updated you on the agent hunt, but not much else.  That’s because my brain has been occupied by other things.  Family things, money things, drama things, work things, electrical things, body things, sleeping things, storm things, snow things and cat things.  Cat things?  Eww…

I have opened and closed just about everything I have been working on or started recently, and found myself too distracted to concentrate.  Worse, I seem to be willing to do just about anything BUT write.  So I unplugged my XBOX.  Stupid Batman.  (Don’t tell him I called him stupid.  If I wake up in a dark cave, hanging from my ankles and surrounded by bats – I’m blaming YOU!)  I thought for sure that would work, but I ended up moving my entire living room around and cleaning instead of writing. 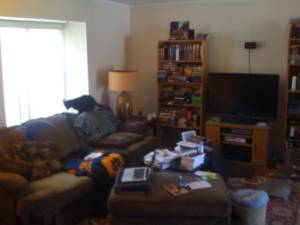 Before (OMG SO MESSY!)

Writers group wasn’t much help this month.  That came out wrong – they were a huge help as always, offering up fantastic critiques of my written words, it just didn’t motivate me the way it usually does to open up the laptop and put words to page.  I came home and watched TV.  Argh.

I’ve noticed that when I am unfocused, I bounce around from project to project a lot.  In the last two weeks, I have opened and started a total rewrite of Cord Cahill, then I switched to my short story ‘Murder Redemption’, then bounced to the Space Opera, then to the super secret novel project, then back to Cahill, then to my sword and sorcery thing, then to my Functional Nerds column, then I started something new (wrote one line), then another something new (gave it a title), then to a thing I started that didn’t feel right like a year ago called ‘Aven Tor’.

Sigh.  You get the picture.

I know, I know – writing excuses.  Sometimes it’s difficult to focus when life around you feels out of your control, which it has of late.

Part of it is getting into agent search mode for the novel.  I did research previously, made some lists and am now going back through, marking who I want to contact first, revising my query letter, reading through websites and submission guidelines so I get that part right, that sort of thing – which is all a different kind of distraction.  I obsess over the query letter.  I want it to be perfect.

In some respects, the query letter is like a thousand times worse than the cover letter on your resume.  The concept is the same, but it feels like more depends on the query letter – does that make sense?  So I obsess over ‘getting it perfect’.

Eventually, just like with everything else I write, I have to stop obsessing and call it ‘done’.