Review: Welcome to the Jungle

HomeBlogReviewsReview: Welcome to the Jungle

With a name like Harry Blackstone Copperfield Dresden, how could you not become a Wizard?

At the tender age of six years old, Harry Dresden became an orphan.  His mother, Margaret Gwendolyn LeFay McCoy Dresden, had died giving birth to Harry and his father, Malcolm, died of a brain aneurysm leaving Harry all alone.  For a few years, he lived in foster care until he turned ten and his ability with magic manifested itself.  Justin DuMorne, a former member of the White Council of Wizard’s, adopted Harry and a young girl named Elaine Mallory and took them as his apprentices to teach them the ways of magic.

He was a harsh Master.

When he and Elaine were in their teens, Justin showed his true colors; he enthralled Elaine to his will and attempted to do the same to Harry, all so he could used their power, combined with his own, to do terrible Black Magics.  Harry resisted.  A lot.  He killed his ‘Uncle Justin’ and was taken to the White Council to be executed for using Black Magic, one of several Laws of Magic they take very seriously.

The Seven Laws of magic are:

Due to the circumstances and a plea for leniency on his behalf (assumed, it’s never been confirmed), the members of the White Council did not execute Harry, they instead placed him under the care of one Ebenezar McCoy and held the Doom of Damocles over his head; a strict law that gives the powerful Warden’s the right to execute Harry on the spot should they find he has turned to the Black or used it or crossed any rule or law in any way.

All grown up, Harry sets himself up in the city of Chicago and advertises in the local phone book as:

Which brings us to ‘Welcome to the Jungle’.

Welcome to the Jungle is a trade paperback / graphic novel that brings together issues one through four of the Dresden Files: Welcome to the Jungle miniseries as originally published by the Dabel Brothers (subsequent titles are now published by Dynamite).  Chronologically, this story takes place prior to the first novel in the series, Storm Front.

“Welcome to the jungle.  Like any jungle, it is a world of predators and prey. Some of the most dangerous creatures in the world live here.  Very few of them are in cages. And none of them are what they appear to be.”

This is the opening lines of Welcome to the Jungle.

There’s been a mysterious murder at the zoo.  Kind of a high profile case, too.  The son of a local official has been found dead in front of the monkey cages.  But its weird.  Weird means one thing in Chicago: time to call in Special Investigations.

Karrin Murphy, Lieutenant, head of the S.I. division and someone who likes truth and justice to go hand in hand, not always easy with ‘weird’.  Still, she does her job well and, for the most part, the higher ups leave her alone because she closes cases.  She’s a little over five feet tall and full of spunk – Harry’s words, not mine.

She closes cases because she’s not afraid to call in a ‘specialist’ from time to time.

Harry Dresden; closer to seven feet and change, makes for the dashing, hero-type image.  Really, he’s a brawler, a bruiser, he’s the Wildcat to the Justice League’s Batman.  Yeah, he can bring the power but sometimes he lacks finesse.  Doesn’t slow him down one bit, though. 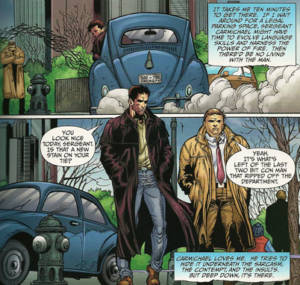 When Murphy calls, Harry answers.  And not just because it could mean the difference between paying the rent and not paying the rent, there’s also the helping people out thing, which Harry has to do.  Maybe it’s the whole ‘Justin tried to turn him into an evil thrall to doom the world so he has to atone’ thing or maybe it’s a deep seated need to prove to the White Council that he’s not the scum of the earth.  Either way, she calls, he answers.

Wizard’s have a lot of tools in their arsenal; one of them is the Sight.  It allows them to see for themselves the after images left behind by trauma and death.  It’s difficult to do because what they see can affect them, essentially allow them to feel the same fears, pain and anxiety of a victim.  Worse, it never goes away; once you’ve seen something with the Sight, it stays with you forever.  Still, it will give Harry an idea of what really happened at the zoo, so he dips into the Sight and takes a look.

Not everyone is impressed with Harry’s abilities.

Mockery aside, Harry sees that something from his side of the tracks is responsible for this death.  Everyone else assumes it was a gorilla who somehow managed to escape his enclosure.  They want the animal put down.  The only ones who think different are Harry and Murphy, but her hands are tied unless he can bring her evidence.

Now it’s up to Harry; find the real killer, exonerate the gorilla and try not to get killed himself while doing it…

So.  I have read all of the Dresden novels up to Proven Guilty, which is #8.  I’m a fan.  Unlike most fans, I did not read the books before watching the series on the channel formerly known as Scifi.  They made a lot of changes that angered people (no blue beetle, dark haired Murphy, short Dresden).  This graphic novel has none of that – it’s a more true representation of the characters than those were – by far.  That’s the power of the comic, of course.  No need for lengthy casting calls.

As a prequel to the novels, this is an excellent story.  It has its slow parts just as any story, but its a strong story and I like it.  Just like any Dresden story, this one starts off with a minor event of Harry doing something to help out a client, then getting mixed up in something larger – in this case, the murder at the zoo.  His ‘aw shucks’ demeanor helps him in his investigation but when he needs to, he can turn off the hick-charm routine and go right into brawler mode, whipping out his blasting rod or his runic staff to kick some butt.

The artwork is fantastic.  I really enjoyed the detail put in.  It wasn’t over-the-top, which I was glad for given the subject matter.  I cringe to think of what the Marvel hero factory would’ve done to Dresden.  Probably some super tall, massively built uber-Thunder God looking dude, which Harry is not.  He gets his ass kicked people.  A lot.

At one point we even get a glimpse at Harry throwing down with old Uncle Justin, Elaine already enthralled beside him.

So – we have Murphy who looks like Murphy, we have Dresden who looks like Dresden and we have the Blue Beetle – already doing better than the tv show, right?  We also have Bob looking like Bob.  And talking like Bob.  I half expected him to demand trashy romance novels in return for answering some questions (he does that in the books from time to time).

The last element to make any Dresden story complete?  Mister the cat, of course. (Reminds me of the new cat in my house: Dakota the lion)

All in all this was a great book.  I admit it, I’m a fan of Dresden as a character so I might be a little biased but if you don’t know the books, this is a great place to get started.  It’s an easy read and introduces you to the elements of the world very nicely, giving you a little stepping off point to dive into the novels if you so choose.

Welcome to the Jungle will run you $20 at your local store sans any discounts you might receive or you can find it online for around $15.  It’s worth the extra rupees if you’re a collector/keeper because it has a nice jacket, thick hardcover and gloss interior stock paper.  Sorry, that’s the marketing guy in me shining through.