A long time ago, in a galaxy far, far away…

Luke Skywalker; last of the Jedi.  Destined to return balance to the Force.  That’s a difficult legacy to be a part of.

Son of Anakin Skywalker and twin brother to Leia Skywalker, raised as an Organa, a lot was expected from Luke.  You see, the Empire had overthrown the republic some years before and Darth Vader, a Sith Lord, had hunted down all of the Jedi and killed them – including Luke’s own father.  One Jedi who survived the purge was Obi Wan Kenobi, ‘Old Ben’ as Luke knew him.  He’d fought in the Clone wars, side by side with Luke’s father only to go into hiding when Vader started hunting the Jedi down.

When Luke comes of age, Obi Wan begins his training in the ways of the Force.  Before he can finish training young Luke, Obi Wan is killed, murdered by Vader.  Luke joins the Rebel Alliance against the Empire and, with the reluctant help of his new friend Han Solo, he manages to destroy the Death Star.  But that was only the beginning.  He soon found himself being trained by a second Jedi to survive the purge; Yoda.  With Yoda, he learns much more about the Force and, with his new power, sees his friends in danger on a city in the clouds.  Rushing forth, Luke falls into a trap set by Darth Vader.  He is forced to fight Vader only to lose his hand and learn that Vader was, in fact, his father and that his mentor, Obi Wan Kenobi had lied to him.

To add insult to injury, Han Solo, his best friend, is captured by the bounty hunter known as Boba Fett and taken off to Jabba the Hutt, a criminal kingpin who rules his organization from Tattoine, Luke’s home planet.  Along with his friends, they rescue Han and return to the Alliance only to learn that a new, more powerful Death Star is being built by the Emperor.  With Yoda dead, Luke is the only remaining Jedi.  He decides to confront Vader and his Emperor while the Alliance deals with the Empire.  In the end, he reaches that spark of humanity left in Vader, that little piece of Skywalker still beating deep within his heart.  Vader turns from the Dark Side, sacrificing himself to destroy the Emperor and save his son.

…the story doesn’t end there, nor does the Skywalker line.  After the Empire falls, Luke meets and falls in love with Mara Jade.  They have a son, Ben, who follows Luke into the new Jedi Order.  Luke’s sister, Leia, also has children strong in the Force who become Jedi.  The Skywalker line continues on until, 125 years after the events on the forest moon of Endor, Cade Skywalker becomes a Padawan…

Star Wars Legacy: Volume One-Broken is a trade paperback / graphic novel that brings together issues one through three and five through six of the comic book Star Wars Legacy originally published by Dark Horse Comics.  Apparently issue four was a stand alone that didn’t fit in with this story, which seems silly to me (for them to do in the middle of series) but, oh well.

You can’t keep a Jedi down.  Wipe them out to near extinction and they come back.  So do the Sith.  They are two sides of the same coin, Sith and Jedi.  Over a hundred years after the fall of the Empire and the rise of the New Republic, a new purge is underway and a new Empire is surging forth to seize power.

Darth Krayt has risen to power and, with an army of Sith following him, is striking out against the Jedi to purge them from the galaxy once and for all.  He sends his Sith to Ossus to destroy the last Jedi Temple and kill all the Jedi and Padawans.

Kol Skywalker and his son, Cade, are among those fighting to survive.  Master’s Skywalker and Sazen order their Padawans, Cade and Shado, to evacuate the younglings while they keep the Sith at bay.

When Master Sazen is cut down by the Sith, Cade rescues him and, enraged and afraid to lose his Master, uses the Force to heal him from the brink of death.

But using the Force this way somehow takes him dangerously close to the Dark Side.  Seeing his father cut down by the Sith sends him teetering over the edge.

He hops into a fighter to cover his Master’s escape with the younglings, eager to kill as many Sith as he can manage.  The last they see of Cade Skywalker is the destruction of his fighter.

A second Emperor, Roan Fel, holds together a ‘loyalist’ Empire not sworn to the Sith.

The Jedi are hunted by Imperials, Sith and Bounty Hunters, a massive price on the head of each and everyone of them.

Master Sazen and Shado, two of the few remaining free Jedi, are convinced Cade Skywalker still lives and are determined to find him.

Elsewhere, Princess Marasian, daughter of Emperor Fel, travels the galaxy seeking loyal Imperials to serve her father so they can overthrow the Sith, unaware she is being hunted by Darth Talon.

She falls in with a band of bounty hunters, her only protection from the Sith hunting her.  They are good at what they do, but one may be more than he appears…

Well, what can I say about this one?

Tons of action, tons of adventure, tons of, well, everything.  You have the developing character of Cade Skywalker; part of a legacy he wants no part of, struggling to become something, but he doesn’t know what.  He’s running from his past and his future, haunted by memories and a destiny he refuses to embrace because he’s afraid that path will lead him to the Dark Side. 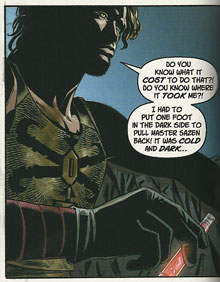 You have a compelling story of a galaxy in upheaval; the two Empire’s exist on top of each other with one Emperor on Coruscant and another constantly on the move.  Each is trying to solidify their position.

You also have tons of Jedi and Sith; the Empire has ‘Imperial Knights’, including the Emperor Roan Fel and his daughter, Marasian.

So even if all the Jedi are hunted down, there are still the Imperial Knights to deal with.  Gone is the ‘one master, one apprentice’ Sith rules, thrown out by Darth Krayt who sees strength in numbers as being more important.  Plus, it gives him plenty of Sith to throw around and into battle.

You can probably tell by now that I really enjoyed this.  The art was fantastic, the storytelling solid and engaging.  I’ve already bought the second volume in this series.  If you’re looking for a great Star Wars story, this is it.  You don’t really need to know any of the expanded universe stuff to get into it.

Star Wars Legacy, Volume One: Broken will run you $18 at your local store sans any discounts you might receive or you can find it online for around $12.