I’ve been feeling a little stale lately when it comes to reading. I’ve bought several books, started them and then moved on without finishing em.

This happens from time to time.

With that in mind, I made a trip to ye olde book seller and picked up a few things to whet the literary appetite.  I haven’t decided yet in which order I’ll be reading these, so here we go: 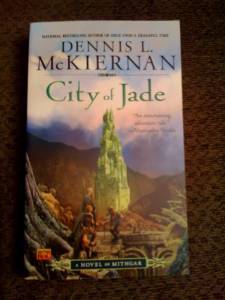 City of Jade by Dennis L. McKiernan (worst website ever).

One of my favorite authors, I was happily surprised to find this book sitting on the shelf.  I can’t remember if I knew it was out but had never bought it or if it had simply slipped under my radar – either way – it was fantastic to find it and I’m excited to return to Mithgar for another tale of Aravan, captain of the Elven ship Eroean.

Here’s the lowdown on the book:

A prophecy and a dream about a lost city made of jade draw Aravan, the captain of the Elvenship Eroean, and his life mate, the Magekind Seer Aylis, along with a crew of trusted friends, into a perilous journey in search of the mystical place.

Behind the scenes, the Necromancer Nunde, follower of a slain god and a sworn enemy of Aravan, plots the death of the elven captain and all those he holds dear.

Set in time between the end of Silver Wolf, Black Falcon, and the beginning of Red Slippers: More Tales of Mithgar, the latest addition to the series brings back familiar characters and further develops an old enmity. McKiernan’s talent for charming characters and exciting adventures of derring-do make this a good addition to most fantasy collections and an essential purchase for libraries possessing the other series titles. 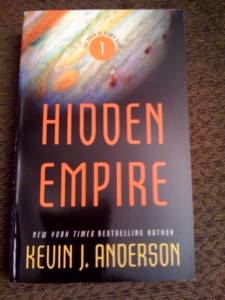 I’ve been feeling that my SciFi literary muscles have been allowed to go a bit soft of late, so in an effort to exercise em, I picked up a couple of very SciFi books – this being the first of those.

I remember TheKJA from other series and I liked em, so I decided to give this a try.

The Terran Hanseatic League, in a heady rush of manifest destiny, turns Oncier, a huge gas planet, into a sun so its four moons can be used for colonization. In the process, the Terrans disturb the ancient but dwindling Ildirans, their uneasy allies, whose leader, the Mage-Imperator, suspects that Terrans are far too eager to take over the spiral arm. Still worse, by inadvertently destroying Oncier’s hitherto unknown colonists, the powerful hydrogues, the conversion of Oncier sets off a catastrophic conflict that threatens the existence of all Terrans and Ildirans. The Earth Defense Forces of the Terran Hanseatic League, the Worldtrees and Green Priests of Theroc, the gypsy Roamers who mine ekti all must unite with the Ildirans to fight the alien menace.

Heck – sounds good to me. 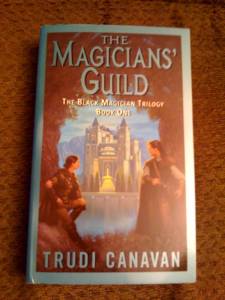 The Magician’s Guild by Trudi Canavan.

I can’t just give up on Fantasy and I’m always on the lookout for something new in the genre, some new take on it all.  This one caught my eye so I decided to give it a try.  Hey, that rhymes.

Each year, the magicians of Imardin gather together to purge the city streets of vagrants and miscreants. Masters of the disciplines of magic, they know that no ordinary lowlife can oppose them. But their protective shield is not as imprenetrable as they think.

Sonea, angry, frustrated and outraged by the treatment of her family and friends, throws a stone at the shield, putting all her rage behind it. She is amazed when it sails unrestricted through the barrier and knocks a magician unconscious.

The Guild’s worst fear has been realised . there is an untrained magician loose in Imardin who must be found before her uncontrolled powers can destroy herself and the city.

Another SciFi series to give a try.

With his wife dead and buried, and life nearly over at 75, John Perry takes the only logical course of action left him: he joins the army. Now better known as the Colonial Defense Force (CDF), Perry’s service-of-choice has extended its reach into interstellar space to pave the way for human colonization of other planets while fending off marauding aliens.

The CDF has a trick up its sleeve that makes enlistment especially enticing for seniors: the promise of restoring youth. After bonding with a group of fellow recruits who dub their clique the Old Farts, Perry finds himself in a new body crafted from his original DNA and upgraded for battle, including fast-clotting “smartblood” and a brain-implanted personal computer.

All too quickly the Old Farts are separated, and Perry fights for his life on various alien-infested battlegrounds.

Well, that’s my list.  For a little while, anyway.

I’ll let you know how it goes and what I think.