What I do when I’m not writing

HomeBlogLifeWhat I do when I’m not writing
October 7, 2009 Patrick Hester Life, marketing 0 Comments

What I do when I’m not writing

I thought it would be fun (for me – and maybe for you) to talk a little bit about what I do for a living. My day job, as it were. I tend to be vague about it simply because that’s smart these days but honestly, anyone could find out where I work fairly easily if they know how to use Google. Still, I remain vague for the sake of vagueries.

I’m a marketing director for a local Denver company that’s been around since 1981. I’ve been doing this stuff on and off since high school, believe it or not. You might think that gives me some sort of heads up on this whole blog/author/marketing thing but I think it’s akin to being a doctor – doctor’s are notoriously BAD patients. Marketing people are great at offering up advice and telling or showing you how stuff should be done, but then we are horrible at following our own advice when it comes to our own stuff (not all of us, obviously – but some of us).

Example: A Former Rocky Mountain News Reporter came to my company, having close ties to the owner, and we hatched this idea of a new blog focusing on the local real estate market – a niche for him, since he’s found himself unemployed following the Rocky’s demise earlier this year. I know what makes a blog work and drives traffic to it: content. Lots of content, updated daily sometimes multiple times during the day, focused on the topic at hand, concise and informative. I work with him, educate him on this stuff and he has taken to it really quickly and is on his way with a blog whose readership is growing daily.

…do I practice what I preach? You’re a visitor here – do you see daily updates? How about multiple daily updates? I am lucky to get in a post a day, maybe. Usually it’s more like a couple posts a week. And it’s not for lack of trying, believe me. I don’t have a lot of time during the day because of the demands of my job and when I get home, I tend to take any ‘writing’ time and use it for, well, ‘writing’. Not that blogging doesn’t count as ‘writing’, cuz it does. It’s just that I focus on the fiction. Sometimes, like with the comic book posts I’ve been doing, I will sit down and go through a box of comics with the laptop nearby and I will write several blog posts as I go.  And this site is called ‘All Things From My Brain’ for a reason – focusing on any one topic was driving me up a wall.  I have to have room to breathe so I created a wider umbrella from which to blog. 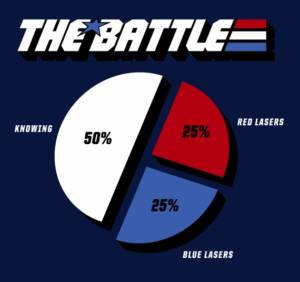 Knowing is half the battle

The point of this is that there’s ‘knowing’ and then there’s ‘doing’. I know what I should be doing to make this site popular and build a readership and then there’s actually doing it, which is where I fail. But I know it and maybe that’s half the battle?

Back to my job – I have to market the company I work for: our products and services and sales people. We have four divisions but five areas where marketing is supposed to be involved. Of those divisions and areas, I tend to get bogged down by two that keep me very busy. For them I do websites, landing pages, fliers, postcards, email marketing, business cards – the list feels endless at times.

It’s not unheard of for me to come into the office, sit down and spend the rest of the day answering emails and phone calls and working on things that people hit me with on the fly rather than anything I actually had planned. I am King of the multitask.

This generally translates to my needing to force myself to write at night when I get home. My brain is tired, but sometimes I do my best work when I’m tired (Welcome to Solar City was started around 1 am and finished by 3).

I am creative for a living, which is great, but I want to be creative in a different way – writing and publishing fiction.  I suppose one could say that marketing and fiction go hand in hand, but I won’t say that…